2016 has been Frogspark’s most exciting year so far. We wanted to reflect on our best moments of the year and also the times where things didn’t go so smoothly (prepare to laugh)…

We have moved offices twice in the space of a year! In March we moved to premises in Ripley to accommodate for new team members but the most exciting move we made was only last month.

In November we moved to Derwent Business Centre, a fantastic building that met Rob’s essential criteria (lots of bricks). We now have premises that provide us with a creative space to work, a separate meeting room, a welcome area and a games room.

Due to the team’s lack of interior design and DIY experience, kitting out the new offices came as quite a challenge.

The Frogspark team devoted a Sunday afternoon to an IKEA trip without a plan of action (mistake number one). The vast amount of office desk options available in IKEA left Rob and Liam somewhat bewildered and resulted in 10 laps of the shop floor.

Once a decision had finally been made and the desks arrived, Rob and Liam broke every desk leg in the process of trying to build them. This resulted in a number of trips back to IKEA until, eventually, the team had functional desks on which a Mac would be safe to sit on. 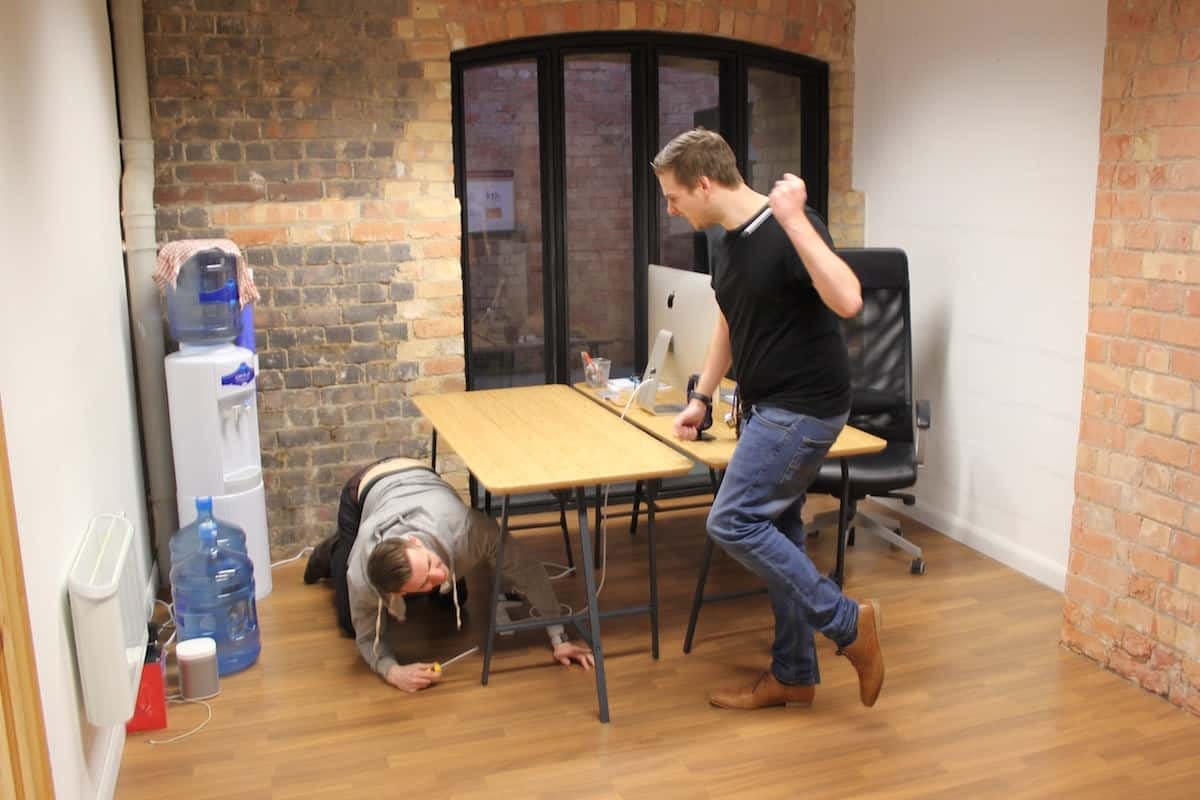 I guess another highlight of 2016 would be the creation of our nickname ‘Frogsparkles’ created by Derby Days Out – a lovely client of ours.

However, best moment #2 is actually about our excitement to have recruited 5 new team members including 2 digital marketers and 3 new web developers! We now have a great team of experienced, ambitious individuals who have brought a huge amount of value to Frogspark.

One of our newest team members, Paul, loves a Wagamamas (especially the delicious soup you get with a chicken ramen).

We found out that he loves it so much that he also likes to soak himself in the stuff. After finishing his noodles, Paul tipped the bowl of soup over his jeans to create chicken juice jeans – an item of clothing worn by employees of Frogspark that gives a chicken-y aroma to the office that lingers all afternoon.

Paul also had to walk the length of Derwent Business Centre back to the office with the most indiscreet wet patch in the most inconvenient place.

Being part of Marketing Derby has been great for us for many reasons. The events organised by its members has led to business and partnership opportunities as well as good friendships with other local business people! We have also learnt a lot about Derby and the industries of Marketing Derby Bondholders – Liam, Director of Frogspark

Liam and Rob were very much looking forward to the Marketing Derby Christmas party held at The Roundhouse but with more than a few meetings all in one day, they had little time to consider what they would wear.

It was clear when they arrived at the event that they stood out a little from every other attendee with someone commenting “did you not get the memo, lads?”. Rob and Liam had turned up to a black tie event in jeans and a shirt. They were refused entry at the door and told to go home and change before returning.

When we reflected on the growth of Frogspark earlier this year, we discovered we had doubled our turnover in just 12 months! This was a result of building our portfolio working with a range of clients showing innovation in their industries. You can find out more about our growth in this blog.

Normally, there are two modes a business is in the week its staff break up for Christmas; chill mode and EVERYTHING GOGOGO.

Frogspark are definitely currently in mode 2: a couple of weeks ago we started working with our biggest ever client and it’s all hands on deck before we shut down on Thursday. So when I walked into Frogspark’s headquarters this morning, I was surprised to see the team standing around in the welcome area.

In his haste to hydrate his mouth whilst on a call, Liam had knocked his water over a plug socket which tripped the power and resulted in a synchronised Mac shutdown. You’ll be pleased to know that no Mac was harmed in the process and we are back up and running as normal

On the topic of shutting down, we’re finishing the year with a big Christmas fuddle prepared by the team! Frogspark will be closed for business from the 23rd December to the 2nd January. We are back open on the 3rd January. If you need our assistance urgently, please contact us via email: hello@frogspark.co.uk