#SearchLeeds 2017 with the Digital Marketing Team

Our day got off to a fantastic start. Ryan was about half an hour earlier to arrive (as usual), whilst Paul was fashionably late (again… as usual). Both had remarkable excuses, with Google Maps taking the blame on Paul’s behalf. However, we all arrived at Rob’s house, packed the car and hit the road!

Upon arrival, after some frantic googling to find a car park near the arena followed by panic over the sheer vertical rise of the car park ramp we found, we were greeted by the super friendly team from Branded3. They gave us our ID badges and a little goodie bag packed with information about the event, guests and some cool little freebies too! 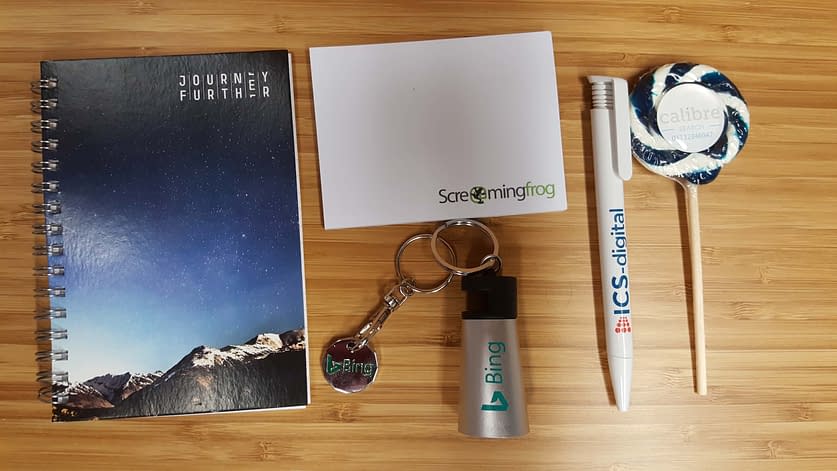 The main stage was an impressive sight, to say the least, we loved this awesome feature:

It is definitely unique and eye-catching! Also a great photo opportunity!

Audience development: how SEO & social work together at a large publisher

Having arrived late, we’d already missed the first set of talks, which was – in hindsight – pretty disappointing as the remaining sessions were all worth the journey. The first session we observed was delivered by the head of SEO at the Telegraph; James Carson. His talk orientated around audience development, with a focus on how the telegraph utilises social media to boost their SEO. He talked us through their strategy cycle and where SEO fits into it.

Our second session was delivered by Danny Blackburn on behalf on Stickyeyes. Being the content director, his talk was centred on content and how to make content valuable to your audience. Given our current interest in creating video content on our blog, this was something we found incredibly useful.

The most important things we took away from this particular session is that good content is not necessarily defined by being popular, but instead what people expect from the brand publishing the content being aligned with what the audience is actually interested in. It was during this second talk we were also introduced to the idea of “micro-moments”, wherein we are finding the information we want when we want it. For example, if you are searching for a place to eat nearby, chances are you want food there and then, it is in that “Micro-moment” you search for information, and food companies around you will want to be in the right place at the right time – at the top of SERP’s.

Our third session of the day featured the most influential brand in search marketing. Stephen Power gave a presentation as part of Google, aptly titled “We don’t go online. We live online”. Stephen really emphasised on the idea of “micro-moments” and from here they became a recurring theme throughout the rest of the day. He further defined micro-moments into a set of verbs that provide the most common searches, for example when we want to know, watch, do, buy something or travels somewhere.

The rise in micro-moments coincides with another rising trend, that of voice search. Surprisingly, the UK is leading the outreach into new voice search technology like Google, Siri and Amazon Home. Once he had discussed all he could about micro-moments and their growing importance we moved on to some slightly more technical insights. Page speed and load times and ad extensions being of particular highlight.

During the lunch break, we had our first chance to sit down and breathe. The day so far had been quite hectic with the combination of travelling, finding the arena and then jumping head first into the event, it was our first proper break. We took the chance to chill out over some paninis and coffees and plan the rest of the day in more detail. When we went back into the arena we headed straight back to our seats ready for the next talks. Our plan the next talks involved some frantic rushes in between the different stages to get to talks we were interested in.

The first talk after lunch was a well rehearsed double act between Neil Astin and Steve Baker from Epiphany. Between them, they discussed the key facets to improve the performance of paid search campaigns. Their first key point was how PPC models integrate into business models. One of the biggest factors we took away from this talk was how important it is to have a desire to care about clients and their services (something we do already have) in order to provide the best service possible. Ultimately, the more data you have about the business, the better adverts you can create, as they become more relevant and subsequently more efficient.

The audience’s attention was then handed over to the second member of the duo, who discussed successful campaign structure, drilling down through ad groups, product types, and ending in product brands. There we also continual back and forth of input around targeting your primary audience for high converting CTR’s and not targeting as many clicks as possible, as well as advertising platforms on the rise, such as Bing and LinkedIn.

After the duo had rounded off their presentation, the stage was handed over to the Koozai representative; Samantha Noble to discuss the future of paid advertising and the potential strategies that it would open. Samantha predicted that in the not too distant future the adverts we see online would be more heavily personalised to include names and address the audience more directly. There was also the prediction we could start to publish one set of adverts for one target audience and an entirely different set of adverts for another, both aimed for the same product and automated to get the most efficient adverts.

This is where the mad rush came in, as there was a conflict in the team’s best interest. Paul wanted to stay in the main stage for a talk about what agencies were hiding away from the public, whilst Rob and Ryan thought the talk by Barry Adams on how to convert SEO recommendations to business gains. Rob and Ryan had a bit of a surprise in their session – it contained a lot more explicit language than they had seen throughout the entire day. And Barry really seemed to have something against Google’s customer service, funny how Paul also had problems with Google that same day!

All jokes aside, the session was incredibly insightful. He suggested that the character limits on page titles are obsolete and providing, all of the information in the title is useful, the visual element of clipped titles doesn’t matter anymore. However, he also claimed that meta descriptions should be kept to the 160 character limit, as it promoted better-optimised text with stronger CTA’s.

Barry also brushed up on the other limits we face as digital marketers, including those we very rarely hit; the 50000 limit on links for an XML Sitemap being a prime example. Even though sitemaps can potentially get that large, Google search console won’t show you how many links have been indexed if the number surpasses 400, which might explain Barry’s explicit annoyance with Google.

So how good (or bad) was that pitch? 10 real examples of practises that either won or lost you that contract

The final two talks we listened to were slightly smaller and more focused on a particular niche. The first was more for the interest of Rob as it was delivered by Martin McGarry from WhichBingo. He spoke about sales pitching, and how to improve a pitch to stand out from the crowd, which will hopefully be more likely to secure the contract. From this talk Rob has been quite excited over creating some nice little packages of which he has titled “sale” and “thanks”, each to involve a selection of different Frogspark branded products, so you might want to look out for those!

The last session of the day was a little insight into the SEMRush ranking factors, that they had found are affecting SERP rankings after a considerable amount of research. In a nutshell, they advise we build campaigns around the idea that there is less interaction with screens as it moves over to voice search. There were also indications that using HTTPS is not a ranking factor as such, but instead a trust signal which will also help search rankings.

It was after this, we were ushered out of the stage, so they could set up the bar for the after party. We headed back to the apartment we were renting for the night to freshen up for own after party.

Of course, it couldn’t be a Frogspark outing without some kind of fun, all work and no play make for quite a boring life! So after the conference finished, we headed off to the nearest place that caught our fancy, and it happened to be the Brewdog down the road! So we sat down after ordering our cokes and noticed the Nintendo 64 sat there, which meant only one thing: Game Time! The cartridge inserted was the classic 007 Goldeneye, in which it is fair to say, Ryan is very very bad at. After Paul had proven his dominance there, we changed the cartridge for a more family friendly game; Mario Party!

After an intense round of Mario Party, we left Brewdog and went in search of food. We ended up finding a nice little American BBQ restaurant. After finishing off a double bacon cheeseburger, ribs, wings and various sides between the 3 of us we headed out for a few drinks at a nearby pub where we discovered Ryan’s little Corsa can fit a triple wardrobe in (we still don’t believe that), F1 drivers lose 5 stone after each race (it is in fact 3 Kg, but poor Ryan got confused) and then we headed back to the apartment and went to sleep.

In summary, over the course of the day we learnt that:

If you want to experience some of #SearchLeeds, all of the slideshows used throughout the day are available through the Branded3 Blog.

Does your business need to rebrand?