Here at Frogspark HQ we’ve had some very exciting news this morning, we’ve been announced as Derby Telegraph Business Awards finalists 2018! We’re over the moon to be up for the SME Business of the Year award, sponsored by the University of Derby – something that last year we couldn’t have even dreamed of. There is some really strong competition in the category, from the likes of Air IT and Nowcomm, so to be just nominated for the award is brilliant.

Over the past few years, we’ve worked hard to continuously grow and make a name for ourselves in and around Derby and the Midlands, so this nomination is just a reminder of all the hard work the Frogspark team put in on daily basis. This year alone has been full of exciting achievements, we achieved record Q1 sales, boosting our profits by 110%. Not to mention our new recruits; adding a further 5 to our team across both or digital marketing and web development sides of the business. Our web development and a full suite of digital marketing services are helping businesses from all sectors grow and develop continuously, and we couldn’t do it without a close-knit team. Our second quarter has seen a huge 80% increase in profits too!

This year, we endeavoured to take more of an active role within the Derby community, wanting to give something back after all the support we’ve been shown. Helping out with the Children’s Breakfast Club, in designing and developing a website, free of charge, to help accelerate the project’s growth further has been such a rewarding project. Rob has also been mentoring students at the University of Derby, something that he really resonates with, having started Frogspark during his own time at University. One of our most recent projects is working with the Cathedral Quarter on their new website; it’s such a great opportunity to work on a project that is so well respected and highly regarded in and around Derby.

Rob, our managing director said, “Liam and I couldn’t be more happy with the news! We’re proud of the reputation we’ve built in the Midlands, helping businesses to make the most out of their digital footprint. So to be nominated as SME Business of the Year is such an achievement. We can’t wait to see what the future holds for Frogspark!”.

We’ll have to wait until Wednesday 13th June to find out who’s won the award, with the winners being announced at a gala awards dinner, which is to be held at Derby College’s Roundhouse. If you’d like to see nominees up for other awards, or some further details around the Derby Telegraph Business Awards, take a read of their article. 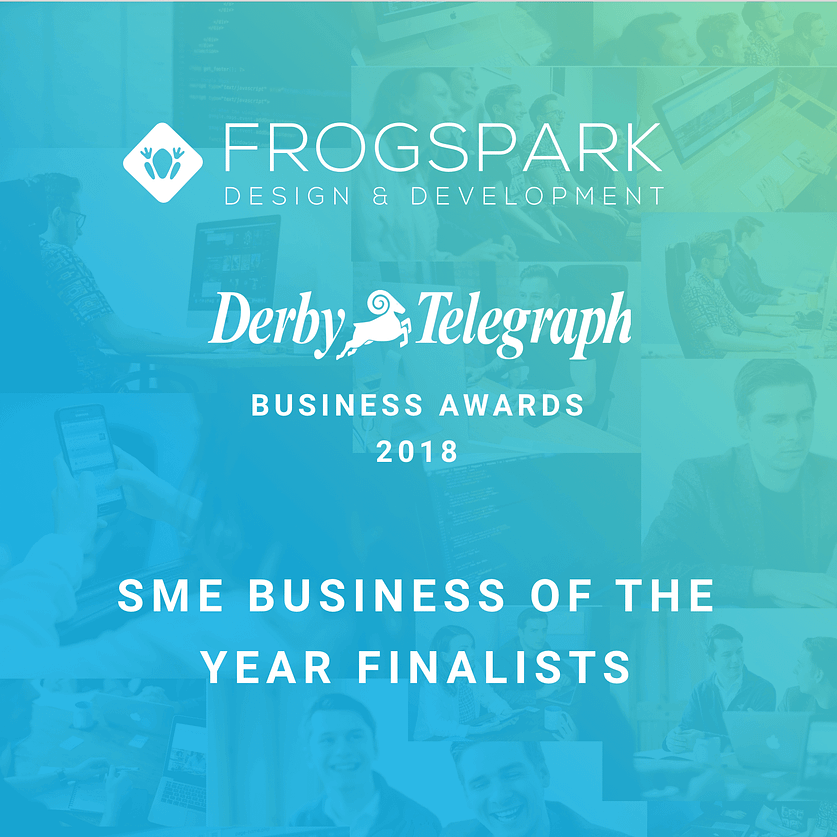