Is Your Brand An April Fool?

That time of year has come and gone, the one we all love and simultaneously hate: April Fools Day. The one day of the year where you don’t know if what you’re being told is serious or if you’re being lead down the garden path. But despite its playground popularity, it’s a tradition that many brands have adopted into their marketing strategy. Each year getting more and more complex in order to pull off the perfect PR worthy stunt.

Before we go any further, you should probably know where it all started. Time for a brief history lesson…

The precise origin behind April Fools Day is shrouded in mystery because nobody has managed to trace it back. With claims it was to do with servants doing foolish errands under a nobleman to claims it was started from mocking countries who didn’t use the same calendar, meaning new years started on different days, nobody really knows how it started. However, it is not a tradition that is shared amongst every country, but it is often commonly understood that mischief must end at midday.

Similar to the excitement around Christmas Adverts, people have come to anticipate and look forward to seeing what elaborate hoaxes their favourite companies will pull off. We’ve listed some of our favourites from 2019 to give you future inspiration.

Perhaps the most talked about is Tinders ‘new feature’. Users were being offered the chance to verify their height, talk about a tall tale! They claimed to have some new “state-of-the-art verifying” that can confirm a users height from a picture of them next to a commercial building. Of course, it was all a rouse but it did cause confusion amongst its users!

Some pranks are less confusing, but instantly make fans the next level of excitement. Lego announced a new app that could seemingly find and highlight the bricks you require through AR software on your phone. A painful task that is normally massively frustrating solved through the miracle of technology! But alas Lego lovers, it is not to be as the prank was widely called out on their social media, along with calls to make it an actual thing.

Google Being A Snake

Google like to take a different approach to April Fools Day, by using it as a day to have fun with its users rather than prank them. Their Maps branch launched a new update in which users could play the nostalgia-driven game ‘Snake’ on Google Maps across different cities from around the world. This feature will be accessible for the whole week of April Fools, which technically breaks the rules of “before midday only”, but it’s not a prank so we will let it slide. Google being the size it is, there were pranks and news stories from each of their different departments including Google Tulip, and the all-new “Google Screen Cleaner” from their files app.

We all know somebody who dips their fries from McDonald’s in their milkshake. Whatever impulsive reaction this sparks from you, whether it’s disgust or curiosity or outright support – McDonald’s have used this to leverage their own prank. Announcing the new range of sauce pots to accompany the likes of Ketchup and BBQ. Understandably there was a mixed reaction on social media following the announcement.

The brand synonymous with the Swiss Army Knife has even had a dabble pranking with the announcement of their Swiss Army Glasses. Featuring everything you could ever possibly need in your day to day life, all cleverly concealed within the frames of your prescription glasses. Who said practicality and fashion couldn’t be the same thing. Victorinox put a lot of effort into their spoof advert, including a quick appearance from their director of product management – they even showed off how it was designed and made!

Time for tea? That’s exactly what KitKat created with their April Fools entry. Apparently, they have been working on this treat for 4 years and it was finally time to announce it on April 1st, what a coincidence! With different ranges of tea available to suit different KitKats, like 2 finger bags, 4 finger bags and even chunky bags all developed by their Chief Teaologist (is that even a real job role?!) Mr T.Bagg. Whilst KitKat tea would be fabulous, it is just another prank. Who even dunks KitKats anyway?

The Red Arrows are known for performing impossible stunts at mind-blowing speed, but their latest stunt takes the biscuit. Their squadron leader has reportedly flown the iconic aircraft under a pier to promote an upcoming air show that they will be attending. Whilst the stunt would be amazing to see if it did happen, unfortunately, the FAA says this doesn’t fly with the rules. But either way, the flying troupe did manage to promote their next appearance successfully all through piggy-backing the April Fools Day hype. 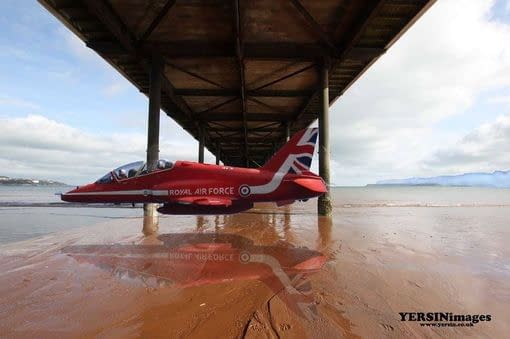 One of our favourite brands of tea has also decided to spread some joy and exasperation with their new spreadable tea! Made for those who like tea so thick you might as well spread it on toast, Yorkshire tea has you covered. With a unique blend of biscuits to thicken up the paste, it’s perfect on toast or a tea cake. Would you try it out or would you stay tea-total from it? We know what we’d do…

Is Your Business A Future Fool?

If your brand is considering executing your own April Fools Prank on your customers, it’s best to start planning early! The more thought you give it, the better you’ll be able to pull it off! The more preparation you can put in now, the easier it is to create a genuine sense of confusion amongst your fans and customers. It’s also important to maintain your brand’s integrity, remember you’re still talking to the same people who buy your products and services. If you’re struggling to keep it in line with your brand, we might be able to help you out – just get in touch! One last thing to keep in mind, don’t betray your users. A bit of fun and a good laugh is all well and fine, but be sure to clear up the confusion you cause after – you don’t want any disappointed customers!

Does your business need to rebrand?